Home#BHM2022- The Unsung Legacy of Black Feminism
A- A A+

The perspectives of #BlackFeminists have consistently transformed the fights for gender equity and racial justice to ensure we can continue to build a world of equity, justice, and freedom for all. That’s why, all this month, we’re celebrating Black feminism and centering the work of powerful Black sheroes past and present doing the critical intersectional work to #EliminateRacism and #EmpowerWomen. This month we center the unsung legacy of Black feminism: from Jane Crow to Intersectionality. 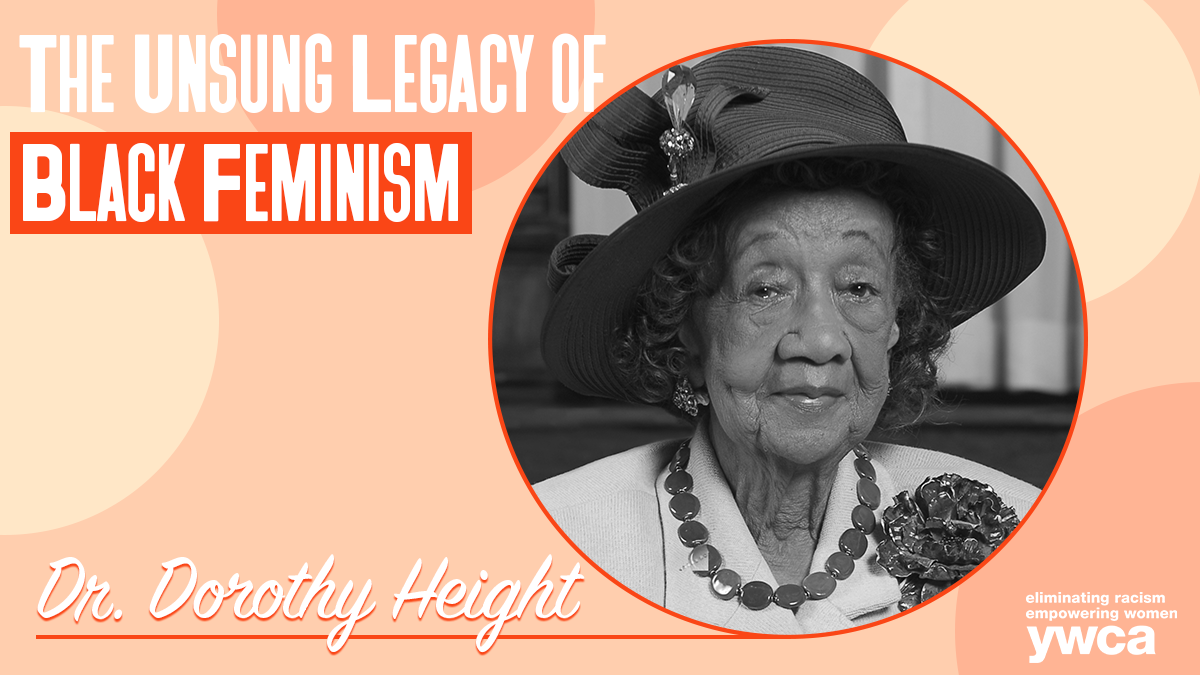 We celebrate the life and legacy of our very own Dr. Dorothy Height. Known as the “godmother of the civil rights movement,” she dedicated her life to the intersectional mission of racial and gender equality and inspired other well-known civil rights leaders, including Martin Luther King, Jr.

#DorothyHeight was one of the nation’s most steadfast civil rights activists, whose intersectional activism as our first Director of Racial Justice led to YWCA’s One Imperative to #EliminateRacism, wherever it exists, by any means necessary. 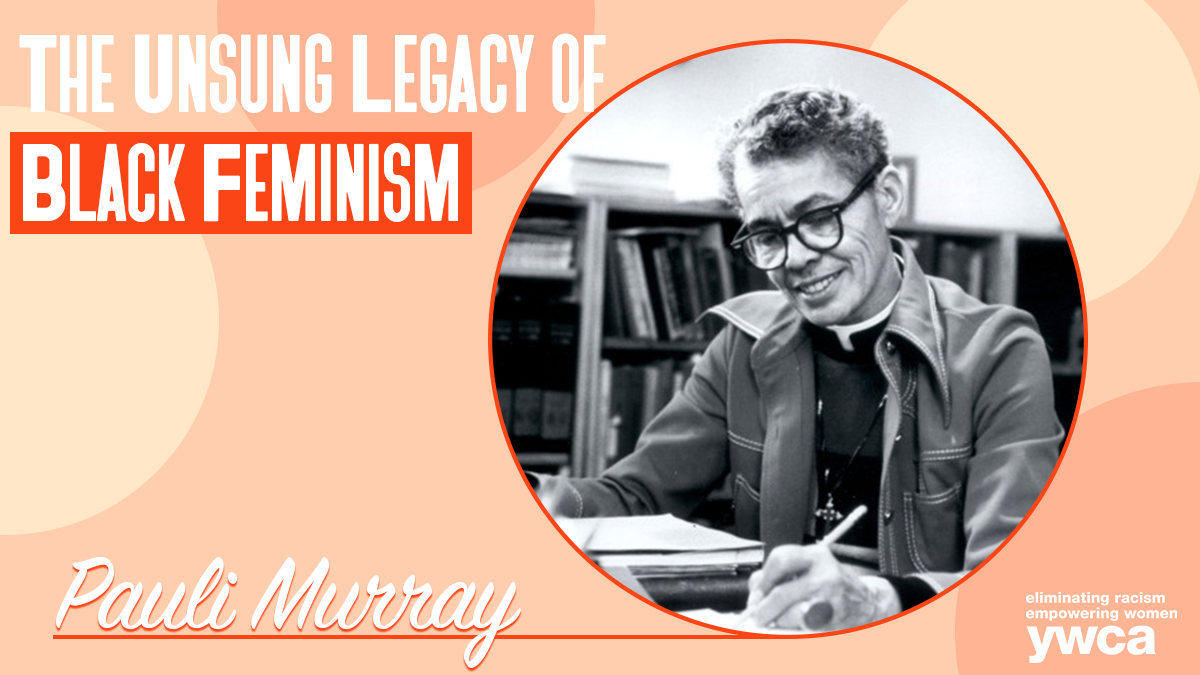 A nearly lifelong activist for racial and gender equality, Pauli Murray became the first Black woman to be ordained as an Episcopal priest in 1977. After graduating from Hunter College in NYC, she was denied admission to the University of North Carolina’s law school because she was Black and was turned down by Harvard University because she was a woman. These experiences with prejudice led Murray to become active in civil rights and women’s rights movements as an activist, scholar, author, poet and founding member of the National Organization for Women.

As the only woman in her law school class, it was at Howard University where #PauliMurray developed one of her most influential and prescient theories #JaneCrow. As she became increasingly aware of the conjunction of racism and sexism in her own life, and in the lives of other Black women, Murray used the expression #JaneCrow — alluding to “Jim Crow,” the discriminatory system of state and local laws that enforced racial segregation in the southern United States — to articulate how racial and gender-based oppressions combined to circumscribe Black women’s freedom, a theory that would later become known as #intersectionality.

Pauli Murray’s articulation of #JaneCrow informed her critiques of the male-dominated Civil Rights Movement arguing that women should be foregrounded within the movement because #racism and #sexism must be battled in tandem. A critique that would inspire and influence many of today’s leaders including #RuthBaderGinsberg, #AyannaPressley, and so many others.

It is at the intersection of race and gender where YWCAs across the country meet to do the work to #eliminateracism, #empowerwomen, and create a world of peace, justice, freedom, and dignity for all.

Let’s give it up for Pauli! #BlackFeminist 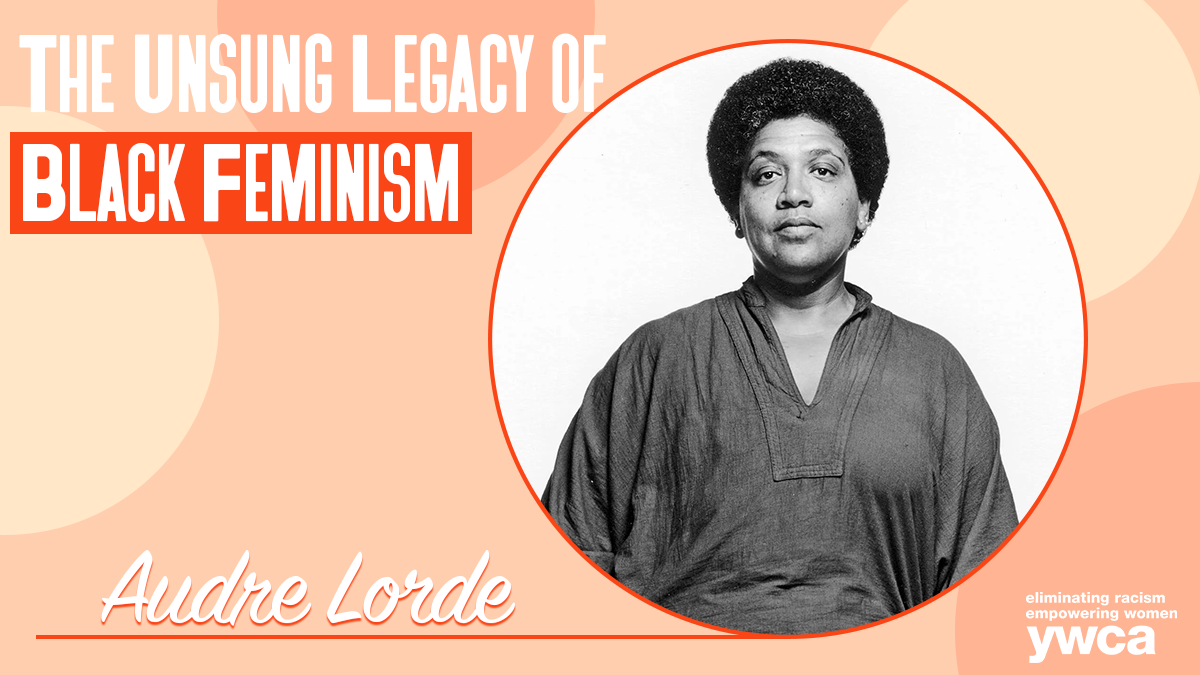 During #BlackHerstoryMonth, we can’t talk about #BlackFeminists without uplifting the life and works of Audre Lorde. As a self-described “Black, lesbian, mother, warrior, poet,” Lorde dedicated her life to grappling with the critical and often intersecting injustices of racism, classism, sexism, and homophobia. She was a vigilant champion for Black queer women whose critiques of the racism within feminist movements offered a voice to Black women who often felt unseen and left behind. Her radical perspectives helped forge the way for the contemporary radical Black feminists of today and created pathways for unity across the social divides she navigated in her own life.

Through books like “Sister Outsider: Essays and Speeches,” “The Transformation of Silence into Language & Action,” and “Black Women Writers at Work,” Audre Lorde curated a mighty voice for herself and paved the way for countless Black women who followed to be open with their experiences and use their life experience as a tool for liberation. “I write for those women who do not speak, for those who do not have a voice because they were so terrified, because we are taught to respect fear more than ourselves. We’ve been taught that silence would save us, but it won’t,” Lorde once said.

We celebrate Audre Lorde and all the space she made for black women — particularly those in the margins and intersections — to leave fear and silence behind and build the courage to lead the feminist movements of the future!

Audre Lorde was an iconic Black writer and poet whose work coined phrases like “your silence will not protect you,” which have become central chants in the contemporary protests aimed to #eliminateracism and #empowerwomen. Lorde was also a longtime social justice warrior whose work helped forge the blueprint to build communities that nurture our spirits and provide lessons learned on how love and radical self-care is essential to movements dismantling systemic injustice.

Thanks to her tutelage we have mantras like, “Caring for myself is not self-indulgence, it is self-preservation, and that is an act of political warfare,” which have been central to the success of modern feminist and racial justice movements. 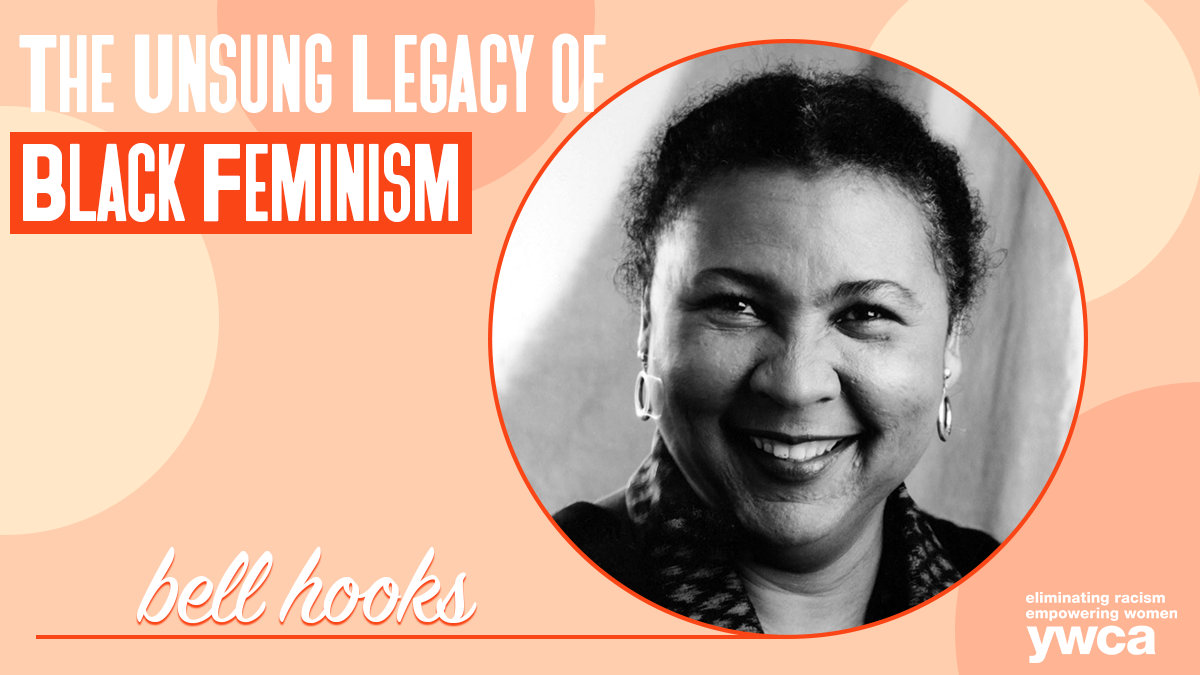 bell hooks was an author, professor, feminist, and social activist whose work focused on examining and uplifting the works of other Black writers while helping provide academic theory to support political organizing happening on the ground. Her extensive catalogue of written works and academic lectures covered topics such as race, class, gender, art, history, sexuality, mass media, and feminism. Some of her most well-known books being “Ain’t I a Woman: Black Women and Feminism” and “Feminism is for Everybody” which are now considered standard texts in intersectional feminist circles.

When speaking on feminism bell hooks once said, “Sexism has never rendered women powerless. It has either suppressed their strength or exploited it.” It is because of the vision and tireless work of #Blackfeminists like bell hooks, that we are reminded that even in our oppression, the experiences and wisdom of Black women continues to lead the way to liberation for all women.

#bellhooks was many things, but at her core, she was always an educator challenging us to learn, grow, and seek resolutions through our challenges. “For me, forgiveness and compassion are always linked: how do we hold people accountable for wrongdoing and yet at the same time remain in touch with their humanity enough to believe in their capacity to be transformed?”

We thank her for providing us new perspectives which empower women and the tools to be more inclusive in our feminist movements. 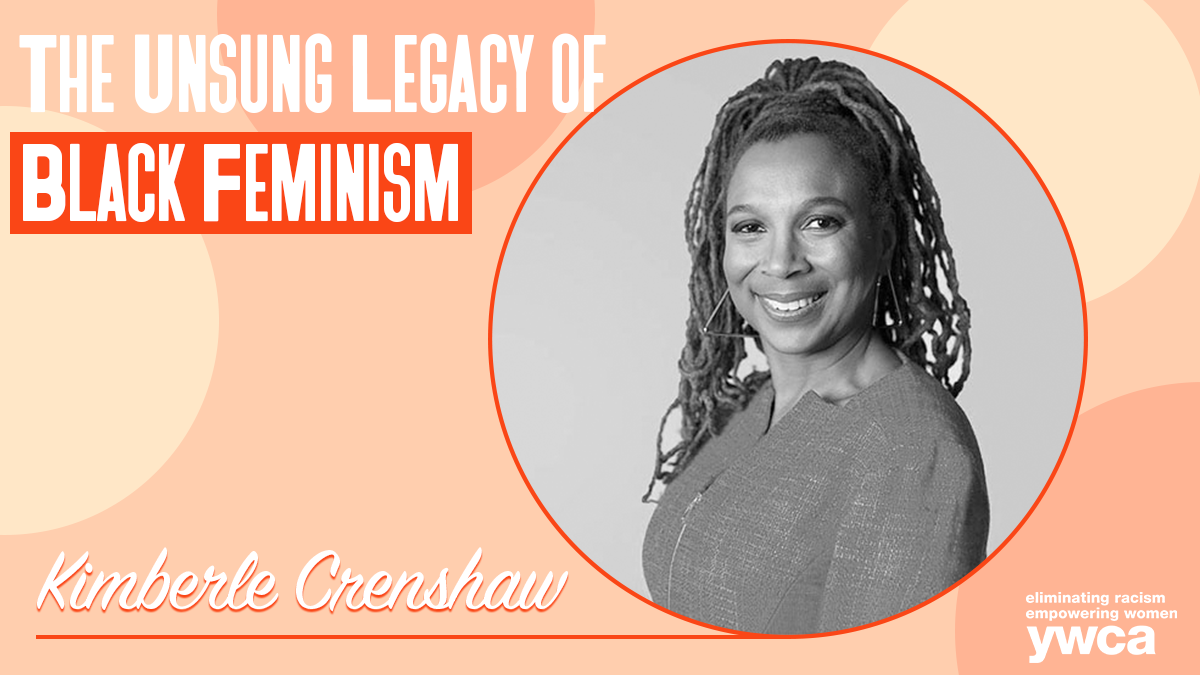 Meet Kimberle Crenshaw, a pioneering civil rights advocate, professor, and leading critical race theory scholar known for not only working at the intersection of race and gender, but for coining the term #intersectionality to call attention to how systems of oppression overlap to create distinct experiences for those with multiple identity categories. Among her many contributions is co-founding and founding and leading African American Policy Forum, an intersectional think tank behind campaigns such as #SayHerName, which calls attention to police violence against Black women and girls.

Not only does Kimberle Crenshaw’s work focus on #intersectionality, she coined the term itself to call attention to how systems of oppression overlap to create distinct experiences for those with multiple identity categories. Learn More 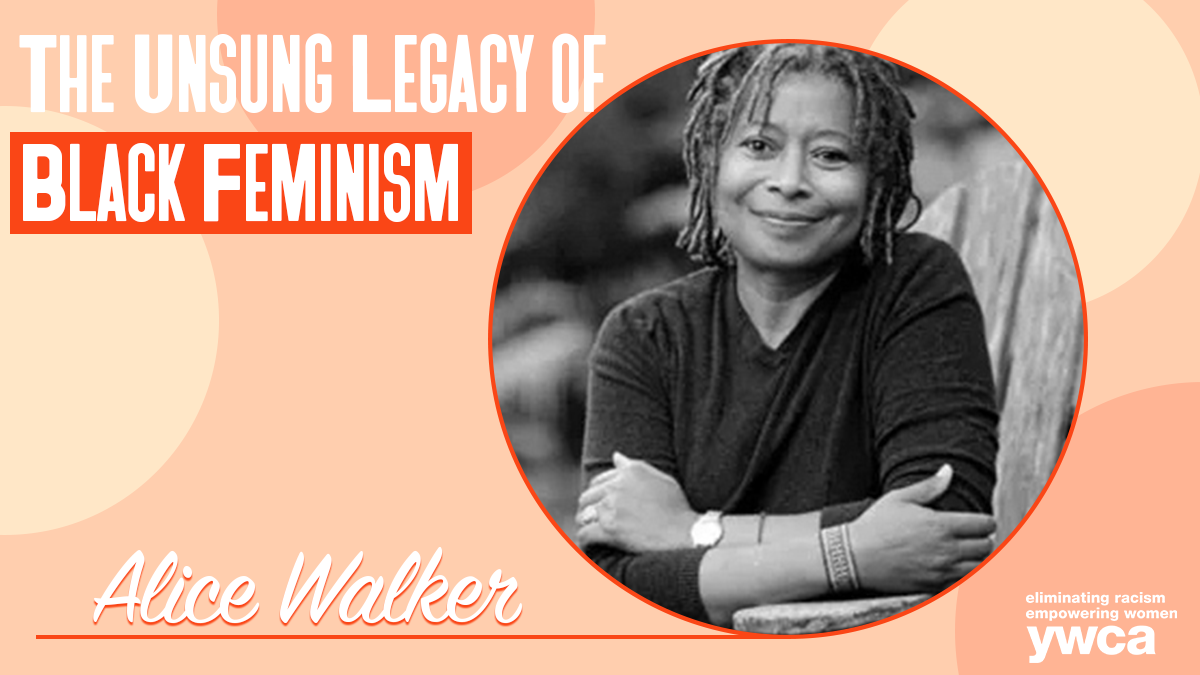 We highlight the work and impact of American writer and social activist Alice Walker. A novelist, short story writer, and poet, she became the first Black woman to win the Pulitzer Prize for Fiction, which she was awarded for her novel The Color Purple in 1982.

Among Alice Walker’s many contributions in writing and social activism was coining the term womanism in her 1983 collection of writings In Search of Our Mothers’ Gardens. Womanism is a form of feminism that centers the experiences of Black women and women of color to unite the movement at the intersection of race, gender, and class, and “gives us a word of our own,” as Walker explained. Learn More about womanism and its history.

Alice Walker’s legacy of social activism in her family. In 1967, Alice Walker and her then-husband became the first legally married interracial couple in Mississippi, and in 1969, they had their daughter Rebecca, a social activist in her own right. Continuing her mom’s critical work at the intersection of racial and gender equality, Rebecca coined the term Third Wave Feminism, an intersectional movement of which she is a prominent voice. Read Rebecca’s 1992 article on feminism “Becoming the Third Wave” 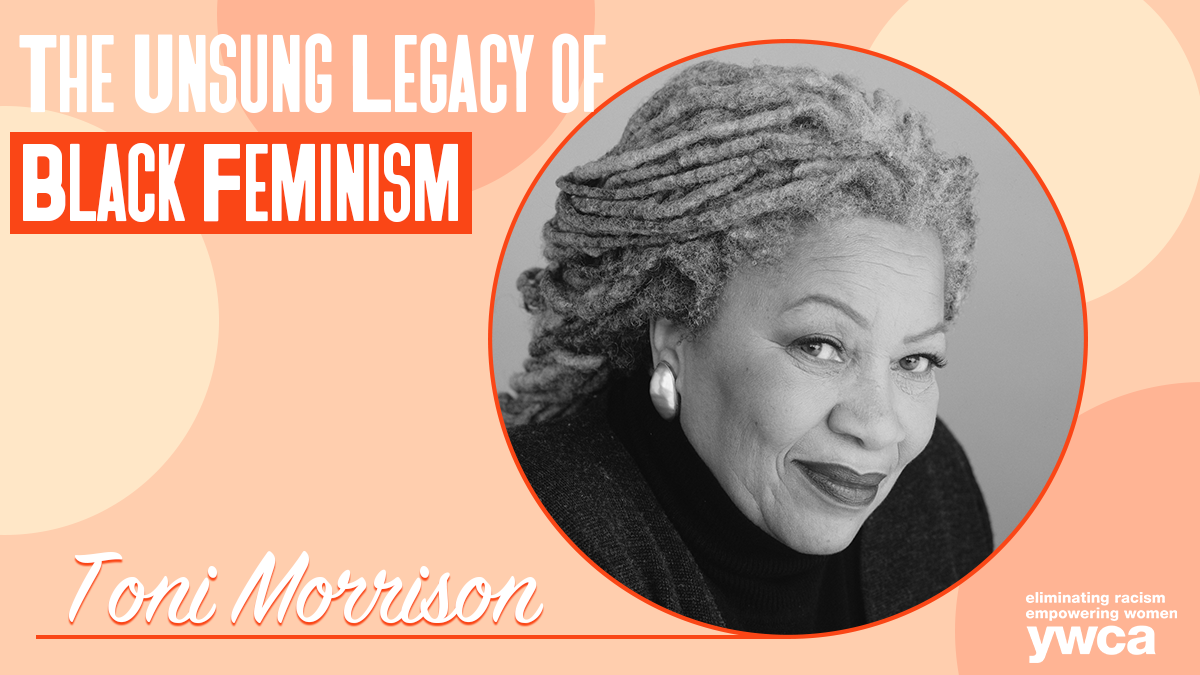 Toni Morrison is one of the most celebrated authors in the world with her catalogue of books including, “The Bluest Eye,” “Song of Solomon,” and “Home.” Her work often grappled with issues of race, class, and gender equity, always with a focus on African American culture.

During her career, Toni Morrison won MANY prestigious awards including the Pulitzer Price, the presidential Medal of Freedom, and she was the first Black woman to be awarded the Nobel Prize in literature. No one could write on the experience of Black American life quite like her, and no one has since. Through her work at Random House publishing, she was also able to edit works and support other incredible Black writers such as Toni Cade Bambara, Gayl Jones, and Angela Davis.

Toni Morrison not only dedicated her work to sharing #BlackStories, but her dedication to making space for other Black women and authors to write about our history through the lenses of magical realism and historical fiction was unprecedented. The far-reaching impacts of her work cannot be understated, and her legacy is truly #legendary. 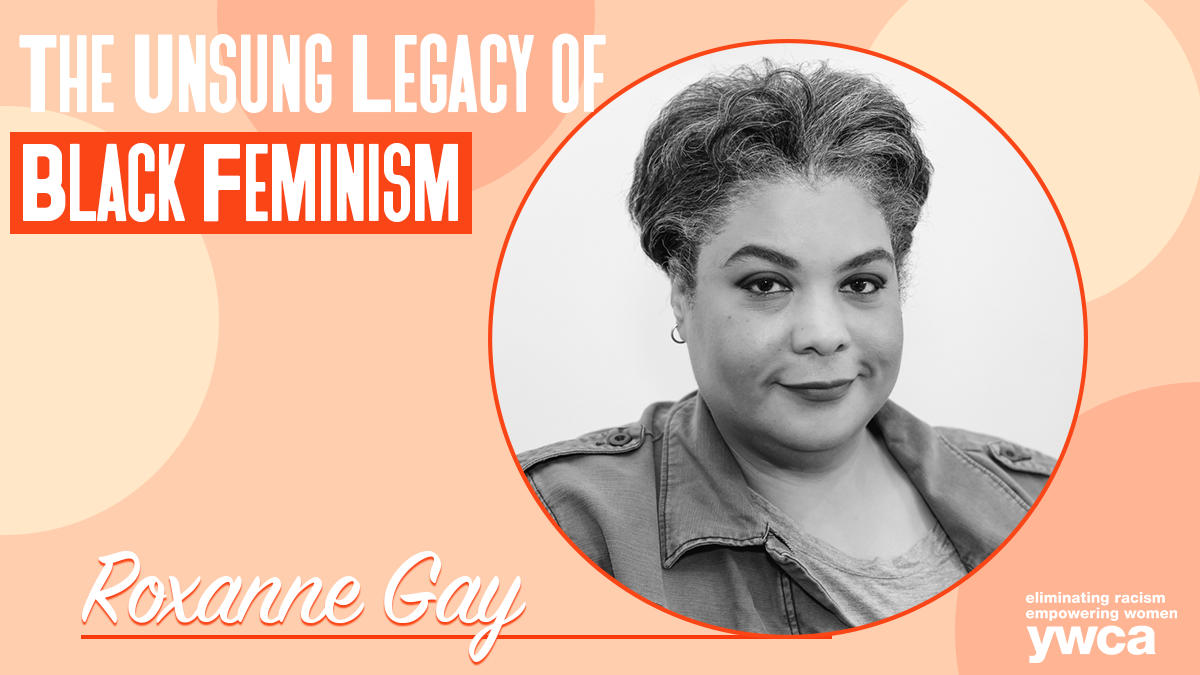 Roxane Gay is a writer, professor, editor, and social commentator whose New York Times best-selling essay collection Bad Feminist, made waves by taking a raw look at race, class, pop culture, and the state of feminism today. Through her writing, she provides her readers with an honest analysis of today’s feminist culture, while also providing an inspiring call-to-action on how we can still do better for each other today.

As a writer her work pulls builds upon the legendary Black women like Audre Lorde who came before her; ensuring their legacy remains while also curating herself as one of the fiercest #BlackFeminist voices of today. Outside of writing, Roxanne Gay’s work and nuanced social commentary continuously critiques existing inequalities and builds space for the possibilities for Black people, women, and the LGBTQA+ community.

We are grateful to Roxanne Gay for carrying the torch her foremothers forged, while continuing to challenge us all to humanize the flaws within modern social justice movements and inspiring us to be better allies and conspirators.

“As a Black queer woman, specificity is incredibly important, because diverse experiences are rarely seen in literature.”